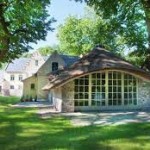 The museum is the former residence of Edgar Gevaert (1891-1965), son of an industrialist from Oudenaarde. In addition to being a painter, he was a poet, writer, and composer and married Marie Minne, daughter of the sculptor. As a pacifist, he committed himself after World War II and worked for a world government and parliament. Countless letters and magazines in the former living room bear witness to this. Gevaert's painting studio is still recognizable by its large windows.